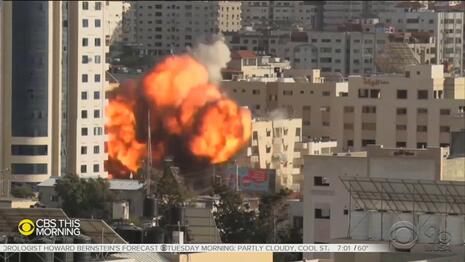 The New York Times continued its historically biased coverage of the intractable Israeli-Palestinian conflict, with new violence by the terrorist group Hamas spurred by the proposed eviction of Palestinian families from Sheikh Jarrah, a neighborhood in East Jerusalem.

After years of trying to get social media moguls to crack down on U.S. right-wing “misinformation” on social media, the paper is suddenly reveling in a new upsurge of the left-wing pro-Palestinian movement on social media, with any regards for accuracy (or journalist anti-Semitism) forgotten: “Palestinians Rally New Support As ‘Arab Street’ Moves to Web.”

Reporters Vivian Yee and Mona El-Naggar’s story on Tuesday’s front page opened on a viral video purporting to show “a young Palestinian woman in the East Jerusalem neighborhood of Sheikh Jarrah” accusing a Jewish man of stealing her house.

Within days — as Israel bombed the coastal territory of Gaza, Palestinian militants there launched rockets at Israel, and Arab and Jewish mobs faced off in Israeli cities — the video had rocketed from young Palestinians’ social media feeds into the Arab diaspora, then lit up the internet, kindling outrage around the world.

The cellphone video joined a profusion of pro-Palestinian voices, memes and videos on social media that helped accomplish what decades of Arab protest, boycotts of Israel and regular spurts of violence had not: yanking the Palestinian cause, all but left for dead a few months ago, toward the political mainstream.

Instead, solidarity with the Palestinians has shifted online and gone global, a virtual Arab street that has the potential to have a wider impact than the ones in Middle Eastern cities. The online protesters have linked arms with popular movements for minority rights such as Black Lives Matter, seeking to reclaim the narrative from the mainstream media and picking up support in Western countries that have reflexively supported Israel.

Yes, the mainstream media is far too pro-Israel!

Yee and El-Naggar spun the ignorance of the new crop of pro-Palestinian social media agitators as a positive, even though they are just applying the old leftist “resistance” template onto a conflict they know little about.

As images of Sheikh Jarrah, destruction in Gaza and police raids on Al Aqsa Mosque in Jerusalem have barreled from Palestinian online platforms including PaliRoots and Eye on Palestine across Instagram, Twitter and TikTok, they have united a new generation of Arab activists with progressive allies, some of whom may not have known where Gaza was two weeks ago.

Palestinian activists say they aim to seize control of the narrative from media outlets that they say have suppressed their point of view and falsely equated Israel’s suffering with that of its occupied territories….

Notice in the paragraphs below how it’s perfectly fine for leftists to accuse the New York Times of lying to its face, while conservative critics would get contemptuous pushback. The paper even takes seriously the idea of social media post deletion, which conservatives have been complaining fruitlessly about for years.

Social media has allowed them to change — or, in their words, correct — the story. Some posts literally take a red pencil to text from mainstream outlets, including The New York Times, The Washington Post and CNN, crossing out headlines and substituting other words. Users also accused Instagram and Facebook of bias when they started deleting posts about Sheikh Jarrah and Al Aqsa, prompting the platforms to apologize, blaming a technical issue.

BIASED! New Research Knocks Fb for Not Censoring 10.1B So-Referred to as Misinformation Views

A brand new examine from a George Soros-funded group used flawed methodology to say Fb failed to forestall greater than 10 billion views of so-called “misinformation.”  The examine used Fb’s truth checkers, proven to be inaccurate and biased, to compile an inventory of “misinformation” posts. It then jumped by some convoluted hoops with the intention […]

Since late January of 2012, the Washington Examiner’s Paul Bedard has as soon as per week featured a “Mainstream Media Scream” choice in his “Washington Secrets and techniques” column. For every decide, normally posted on-line on Monday, I present an evidence and suggest a “scream” score (scale of 1 to 5). This submit incorporates the […]